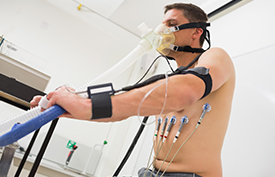 Originally, whole body vibration(WBV) was developed for patients with osteoporosis  and came into wide use as instrument for increasing bone density centering around Europe since 2000. Recently, many researchers have reported that WBV has various positive effects on improving physical performance, energy metabolism, blood flow, and so on during exercise. In addition, it has been suggested that WBV is safer and useful exercise method in exercise field compared to the traditional type of exercise such as running and weight training. However, there is few information and study for scientific evidence on WBV in our country. In the present study, we investigated the effect of WBV on aerobic and anaerobic exercise and also reviewed previous studies on WBA exercise in order to introduce WBV as a new method for exercise-training prescription to all kinds of exercise instructor and athletics.

Together with previous studies and the present results, in can be suggested that WBV has effect on enhancing muscle functions, bone density, VO2max, and blood flow, while WBV exercise decreases body fat mass. Although it is still short of study on the effect of type of vibration and changes of vibration number during WBV, it is considered that WBV would be pretty worthwhile prescription and training method for athletics, instructor, and exercise specialist.