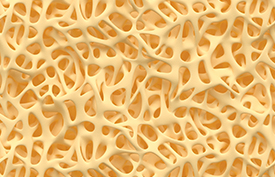 In the present study, the correlation between the improvement of morphological characteristics and the effect of WBV was investigated and analyzed in OVX rats. The rats were randomly assigned to 5 groups: control, sham, WBV 17Hz, WBV 30Hz and WBV 45Hz. The WBV groups were exercised on a vibration platform (magnitude : 1mmpeak-peak, frequency : 17Hz, 30Hz and 45Hz, 30 minutes/day for 5 days/week). The 4th lumbar on rats was scanned by In-vivo Micro-CT at the week 0(just before WBV) and the week 8(after WBV). Structural parameters of the 4th lumbar, based on two dimensional (2D) scan image data, were investigated and analyzed. The quantitative decrement rate of trabecular bone on WBV groups with 30Hz and 45Hz were lower than control and sham groups. The results showed the positive effect of WBV on osteoporoic bones of OVX rats.