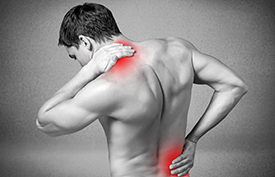 The purpose of this study was to analyze the effects of whole body vibration(WBV) and the compare with conventional therapy(ultrasound therapy) on the delayed onset muscle soreness(DOMS) after eccentric exercise of forearm flexor muscle. Whole subjects of this study were 21 students. They were distribute into three groups : WBV group, ultrasound therapy group, and control group. After eccentric exercise by arm curl machine, same indicator was measured at the before DOMS, just after exercise, 24hr, 48hr, 72hr. Also DOMS level was evaluated at same intervals by making use of algometer and visual analogue scale(VAS). The data of measurement was analyzed by using SPSS 12.00 Ver. To analyze the difference between WBV-control groups and between WBV-ultrasound therapy groups used General Repeated Measure ANOVA. The result were as follows : There are not a significant difference between the groups for algometer, but VAS was difference(p<0.05). And within groups at the all groups was a significant difference for measurement time-courses(p<0.05). The result of this study indicated that most effective group of decreased DOMS among three groups was WBV.